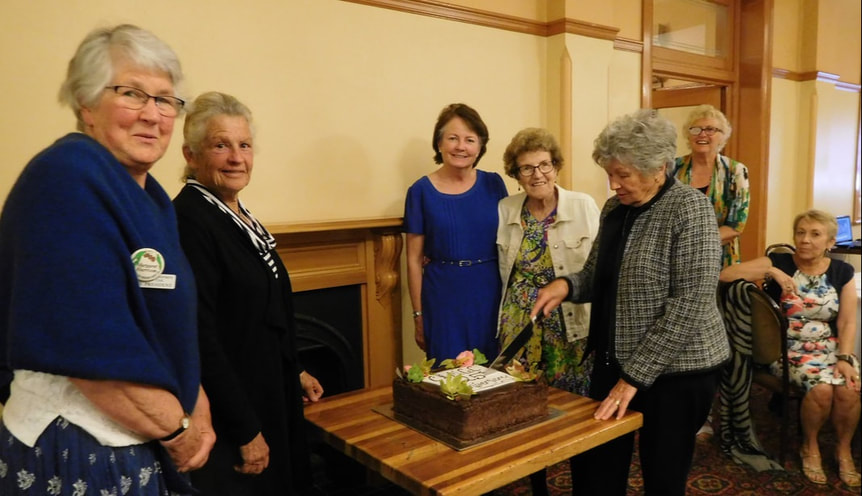 PROUD CONTRIBUTION
Councillor van der Kley praised the club for its contribution over the years to the local community by way of gardening seminars, local festivals, garden rambles, bus trips and in particular, the special five seminars in 2013, celebrating the history of Blue Mountain sgardening since the crossing of the Mountains in 1813.

Mr Lambert took the opportunity of the dinner to announce the appointment of the club's retiring president, John Parsonage, as Garden Clubs of Australia's new Blue Mountains zone co-ordinator. He also presented Beverleigh Boorman with the prestigious Ann William Clark award for outstanding service to the garden clubs over many years.


This is a speech that was presented by Barbara Anson at the 20th Anniversary Dinner, 13 October 2012.

"WELL, you have no idea how thrilled I am to be joining with you tonight.
Who would ever have thought that when Mary Sweeney put that ad in the Gazette so long ago we would gather tonight for this wonderful celebration. I well remember turning up in response to that invitation accompanied by Philip Mountbatten (he of mountain hairdressing fame – not Betty’s husband). Everything was so tentative –almost experimental.

Yes – Two decades and one month ago a handful of folk gathered in a small room at Lawson and here we are! Many of you people here tonight have been a constant part of the journey leading up to this 20th anniversary celebration, so I don’t intend to dwell on the steps trodden along the way. I would like to reflect with you, however, on one outstanding aspect – and that is the great community spirit that has prevailed during the years of the club’s existence. The resulting altruism has taken a variety of paths – always providing help generously in both a practical and financial nature.

In 1992 as part of its genesis, the club’s first project was its decision to participate in the 150 Year Lawson Foundation Celebrations. Since that time the club has maintained a philosophy allowing it to reach beyond its primary focus of gardens, gardeners and gardening by the willing assistance it has contributed towards worthwhile programs beyond the garden.
​
One such area of crucial importance – appreciated by all here tonight I feel sure – relates to the serious issue of our bushfire sensitivity and the marvellous dedication shown by our local Bush Fire Brigades. Regular financial support for five of these stations from the club’s uncommitted funds has been a major priority over the years.

The Lawson Public School Garden Program is an initiative of the Club whilst maintenance of the gardens at Lawson Cenotaph, Gloria Park and Woodford Academy have seen a representation of club personnel giving generously of their time and labour.

Over the years, one-off projects such as The Fred Hollows Foundation Floral Display and, as an aftermath of the devastating bushfires of 2000, the Blue Mountains Community Recovery Project have been energetically supported.

As an adjunct to boosting club finances and interesting and innovative project aimed at accumulating club revenue stems from the relationship the club shares with the Bunnings organization and fund-raising “sausage sizzles” have been a profitable and enjoyable initiative.
​
Well, having touched briefly on some club activities, I wont go any further, apart from my sincere “thank you” to all who over the last 20 years have served on the committee. We commend you on your good management. With the co-operation and dedication that you have received from your general membership, I believe that the combination of judicious management and supportive club members has resulted in our organization standing proudly in the local district on a of levels, though always bearing in mind its national motto of Friendship Through Gardens ”.